Home Home Design Building entirely constructed of white concrete which allows the inside of the... 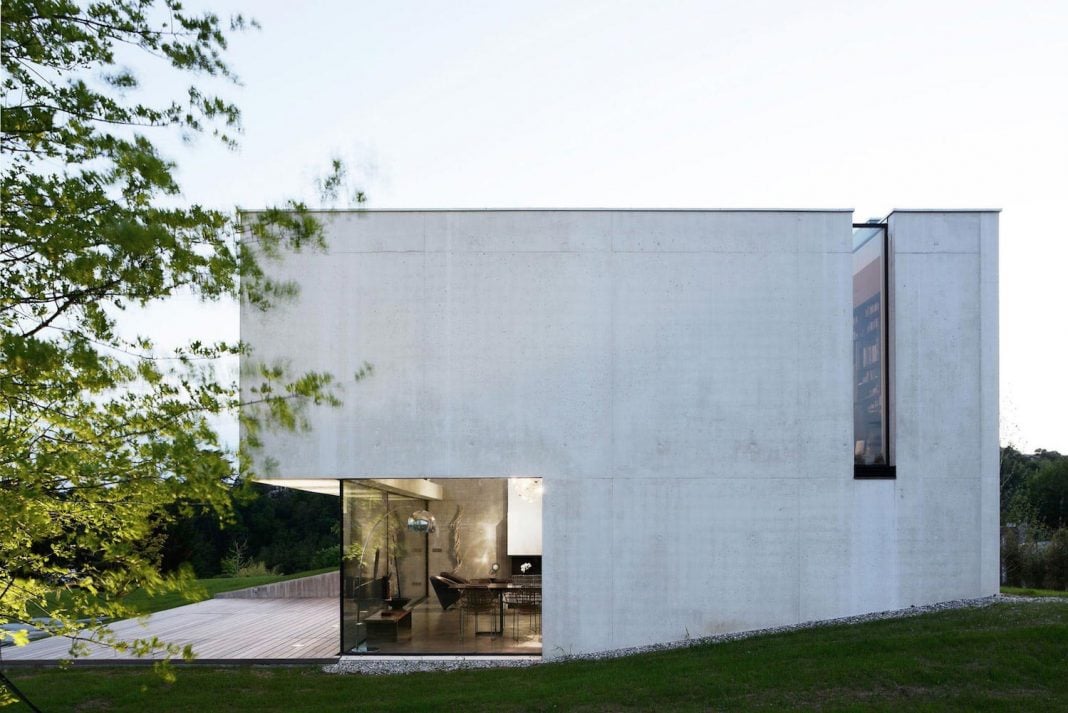 “The Chipster Blister House is born from the collaboration between a couple with 3 children and Pierre Minassian and his team of architects.
The project is located on a sloping site in a small town in the Lyon region. The building is entirely constructed of white concrete and is partially embedded in the ground.
On the ground floor are the living room, the kitchen, the laundry room and the playroom. Upstairs are the bedrooms.

The house has at its ends two exceptional cantilevers. The monolithic lines of this resolutely contemporary volume are meant to stretch to the extreme affirming the duality between mass and void, glazed surfaces and concrete sails.

The south façade is composed of an assemblage of elliptical shape of Corian® matt black resin suspended in front of the rooms and made by IMAGE. Not unlike the little Chipsters, whose form is burnt in the collective unconscious, or the African totem jewelry, these forms bring a particular vibration to the almost ghostly perception of the volumes inscribed between projected shadows and surfaces of an emblematic downy black.

This contemporary mashrabiya allows the inside of the house to profit from a maximum visual frame while reducing the penetration of excessive solar light. An intermediate space between the glazing and the suspended curtain appears to the occupants of the premises and a sensation of extra volume is instantly felt. Viewed from the outside, the facade is uniformed, and in the undulating reflections of the hulls we perceive all the tones of a sky framed between vegetal and mineral.

This house is extremely efficient from an energetic point of view and meets the BBC label. Thus a multitude of technical solutions have been developed to conserve the raw concrete apparent on the outside and the inside. In order to retain a maximum of the raw concrete structure apparent, the roof is insulated from the outside with a system of extremely efficient thin insulating panels. The reinforced concrete walls are divided with thermal breakers and thermal insulation. The imposing veil of the living room in double height has also been left in exposed concrete, which makes it possible to detach visually the structure of the chimney in raw steel. The bridge that plays the link between the library space suspended above the kitchen and the bedrooms is actually a beam of the structure of the house. It puts the space in tension.

This house, whose envelope is largely glazed is a low consumption building. It is heated with a geothermal heat pump and has a dual-flow ventilation. The main façade to the south is largely glazed and has latticework made of resin shapes that reduce solar contributions. The high concrete slab comes largely in front of the facade and thus limits the solar penetrants in summer.”

5 Things Experts Never Ever Want to See in Your Yard

The Best Colors to Paint Your Living Room

© CAANdesign 2013-2017 | All the images and descriptions belong to the architects/ studios mentioned in posts.